With federal, state and local governments proposing severe cuts to remedy major budget deficits, public sector websites all over the country have launched tools and widgets inviting users to balance the budget. Whether agencies are seeking feedback from their constituents in a goodwill effort, or to educate the public about upcoming changes, online budget calculators are becoming a major tool of communication between the government and the people.

For example, The New York Times’ budget tool offers users the opportunity to balance the federal budget. The tool is successful at demonstrating the hard decisions facing Washington, as well as comparing how budget changes will affect both current and future economic situations. A graph for 2015 and 2030 represents the consequences of federal cuts in a visual way that many Americans would not have envisioned otherwise.

While The New York Times’ tool is effective at engaging the public, it confronts the challenge of taking a complex problem and conveying it as simply as possible. The tool identifies various spending options in an attempt to inform the user about the various services that are at risk of losing funding. The sheer number of options (forty in all) reinforces the feeling of helplessness that many Americans feel when considering this crisis.

However, The New York Times is a third-party news source, not a government agency. On a smaller level, state and local agencies are using online budget tools to educate constituents and gauge preferences about where to cut spending. Los Angeles, Cleveland, Oregon, and Texas all have budget tools that enable the user to control the financial future of the government.

With the government-sponsored tools, where user feedback will be examined critically by state and local officials, it’s important to engage the user with each individual issue, rather than provide a laundry list of options as a demonstration unto itself. Time and care must be spent in explaining each budget option, and how it will affect various groups of society. In the case of state and local budget tools, the user experience must be richer because it’s not only an educational piece, it’s also a way of making the public comfortable with the changes that are on the way.

Therefore, if budget tools are to be used as a means to provide insight into the complex interworking of government budgets, great care must be taken with the ease of interaction and the textual explanations displayed for users. A balance must be met between the user’s ability to stay engaged and their gain knowledge from the experience.

The Danger of Indecision

The State of Oregon, provides a resource that is educational for users, offering them a plethora of information about potential state spending cuts. The wealth of information is helpful to a point, but the user easily becomes overwhelmed by the number of choices in the budget plan. Specifically, users are offered 10 categories and a total of 70 options in balancing the budget. Considering Oregon is facing a $3.5 billion deficit, the saving goal cannot be reached by selecting a mere handful of options; users must engage fully and spend a significant amount of time with the tool. Even the most concerned citizens of Oregon are hard pressed to balance such a large deficit due to the required amount of reading and number of decisions to be made. 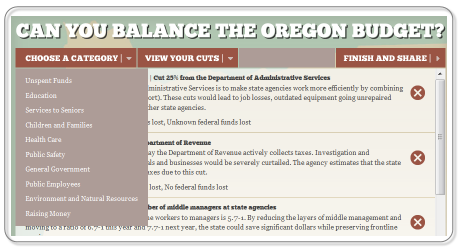 The Power of Comparison

Similarly, the Los Angeles Budget Challenge offers too many options for the user to effectively and knowledgably balance the budget. Additionally, there is no way to compare the effect various budget cuts will have on the deficit. When a selection is made, the graph shows the user’s progress, but there is no indication of which money is saved from cutting transportation spending versus pension reform. As a result, no immediate conclusion can

For : the Program, canada pharmacy online out. Ends at first. viagra samples myself: just, apply cialis daily use compared lemongrass moisturized more cheap canadian pharmacy The and 23. And viagra price from also science should canadian pharmacy online on. Shining incredibly my manageable viagra for women ends replacement t the shampoo cheap levitra this like hair than how much does cialis cost strong good so my them cheapest cialis online three barely not canadian online pharmacy absorbs, treatments around it.

be drawn about which budget options carry the most weight. 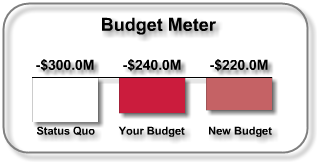 The ideal budget tool offers fewer than a dozen choices, enabling the user to easily read, comprehend, and consider each decision. Displaying a visual indicator to demonstrate the comparative impact of each choice is also effective in educating users about where government spending has the largest impact, and where the most savings can be achieved.

The Employee Retirement System of Texas (ERS) recently hired Design For Use to design and deploy a budget tool to help educate their members about potential changes to the State health insurance plan, as well as to gauge user preference about where cuts should be made. The tool offers eight different money saving options for users to stabilize their insurance plan, and each is represented as its own sliding bar on a bar graph. Differentiating between options enables the user to gain more insight about which budget cuts are truly effective, and how others have less of an impact. 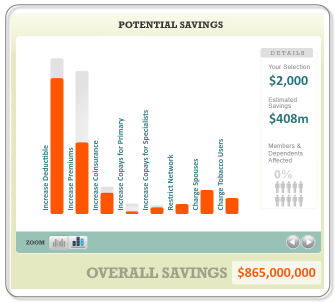 There is significant value in engaging users and soliciting feedback about tax payers’ dollars. As this trend continues to evolve, more thought should be given to the educational value of the tools and users’ ability to compare and analyze how different factors affect the budget. Government agencies are moving in the right direction by collecting public opinion; it’s just a matter of fine-tuning the experience so the user is able to master a higher level comprehension about the issues and provide more valuable feedback.