Who is Design For Use? We’ve got team members all over the world from all different backgrounds and perspectives. But the main thing we’ve got in common? A flair and passion for UX. In this interview series, we’ll take some in-depth looks at the unique flavors each of our team members brings to the table.

Our inaugural interview is with Bryon Pigg, who’s been an interaction designer with Design For Use for more than a year. Check out the transcript of his interview below, or listen to the podcast here. 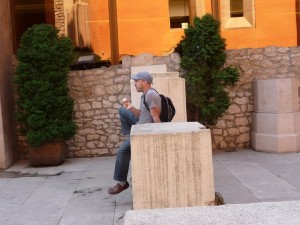 VH: Why don’t we start with you talking a little bit about your professional life before you got into UX?

BP: Well, prior to doing UX, I worked in architectural design offices for a number of years—about ten, twelve years—and I had all different sorts of jobs in those offices, everything from in the very beginning being primarily an office manager and account support person and then sort of moving up the rungs from drafting and model building to project management and design. So prior to doing UX, I was in the design world for several years, but really looking at very different problems than the ones that we typically look at with Design For Use.

VH: Tell me a little bit about your decision to transition to UX. What made you decide to change?

BP: Well, there were a few different factors—the first being that I hit the point in my career in architecture where it was time for me to decide to be all in, and to really look at getting licensed and doing this for the rest of my life. And I realized that that’s not really what I wanted to do, but that I still wanted to be in the design world. And then the other side of that was realizing that the problems that I really liked to solve in architecture were not the kinds of problems that come up in the average project.

So for example, a good analogy would be if you’re designing a hospital, you’re thinking about things that are specific to the people who are going to be using that space: doctors, nurses, patients.  Unfortunately in architectural design, those types of problems don’t come up very often unless you work in a really specialized office. So the analogy with UX would be to think about task flows and complicated task flows—the difference between designing a highly-specialized website for a retirement system or for energy traders as opposed to designing a blog where someone’s just throwing up their photographs and writing a couple paragraphs every few weeks.

VH: How do you feel about the transition you made into UX? How did you find that process of transitioning?

BP: Well, you know, the beginning was tough. I think that once you’ve acquired a certain amount of expertise in what you’re doing, and a certain amount of confidence, that moving back to square one…I certainly did not have the kind of inside knowledge that I enjoy in the architecture world. So there’s a lot of learning new lessons, and learning how to learn again, if that makes sense—learning how to question all of your assumptions and to really push on yourself to think about fundamentals and not just take them for granted the way that you do with things that you’re very well-acquainted with and fluent in.

So in the beginning it was a little more challenging than it is now. But I think that what I’ve been able to do during my time here is to really think about the process of learning how to think about new systems that you’re not familiar with at all, and the process of self-educating—moving from a highly specialized user group to a different highly specialized user group and learning how to get inside the heads of those people is a really important skill if you’re going to be effective in designing tools for them.

So I think learning how to do that—to move from broader groups to more acute groups—was certainly a difficult thing to do, and something that I still work at with every project.

VH: What parallels can you draw between architecture and UX?

BP: I think complex problem solving is the most generalized analogy you can make. In architecture, you are figuring out things that are not evident in the final product in terms of what you see but are extremely important to how something functions—and the same is really true with UX. I think the difference is that with UX design, you spend a lot of your time thinking about how something functions, whereas in architectural design, you’re only doing it for the first phase of the project. There’s a certain point where the functional stuff gets locked in. But really, the heart of what we do as UX designers is mapping those adjacencies and making sure they’re intuitive to all the users that are going to be using whatever product it is that we’re working on.

That kind of cross-pollination between roles is really important in terms of helping everyone do their jobs better.”

BP: Well, they’re different to some degree, but I would say that…in my experience, the way that we function as an office and the way a lot of design offices function is: someone is responsible primarily for design or project management—be it UX design or visual design—but ultimately at the end of the day, even if a task is not in your primary wheelhouse, you still end up touching it and having some involvement in things. And I think that kind of cross-pollination between roles is really important in terms of helping everyone do their jobs better and as a mechanism for exposing designers to ideas about project management and vice versa.

VH: How would you say your background has given you a special edge or advantage in UX that maybe others don’t have?

BP: Well, I think that the one thing that an architectural education will do for anyone who is interested in design regardless of what field they’re applying it to, is that you really learn that there isn’t one solution to a problem and that you really shouldn’t stop as soon as you solve something. What I mean by that is: your first working solution is typically not your best. Learning how to iterate and how to be patient and how to understand when you’ve hit a dead end and when to take a break and come back to it later. So learning that patience is a process is certainly important.

There isn’t one solution to a problem and you really shouldn’t stop as soon as you solve something…Your first working solution is typically not your best.”

I think people acquire that from a lot of different means, but in my case, I think particularly as a student, I learned a lot about that.

VH: Where do you see your UX career going?

BP: For me, right now, what I’m most interested in is getting a greater diversity of projects under my belt, and that’s one thing that I really like about my job right now. The projects turn over relatively quickly, so every few months you’re working on something else. And they’re varied enough that I feel like I’m getting really broad experience.

So for me right now, my priority is to continue to expand my knowledge in terms of the different types of clients that are out there…Along with that, I’d like to expand form factors and project types…Maybe doing a game at some point would be great.

For complete audio, listen to the podcast here!