A feel of the real is very important in User Experience Design and we often find clients asking for prototypes (proof-of-concept) during the design process. Prototypes better communicate the interactions and navigation of the proposed design than static wireframes and mockups. Prototypes can be created at various stages of the design process (Analysis, Design or actual Test), for an informed user and client feedback to reduce number of design iterations. There is a broad array of prototyping applications available to suit the purpose, skill set and the fidelity required of a deliverable. In this blog we present a brief survey of common prototyping tools.

High fidelity prototypes get as close to the final product as possible (without any actual back-end coding). Visual mockups are usually used as starting points for creating high fidelity prototypes. The interactions are added to the existing widgets in the mockup itself. Flash Catalyst, GUI Design Studio, and Microsoft Expression could be used to create the visual design mockups themselves. Applications like Flash Catalyst can import designs created in Photoshop and Illustrator easily and allow easy additions of an interactivity layer on top. Microsoft Expression and GUI Design Studio are end to end tools that allow wireframing, visual design and prototyping in a single workspace.

Apart from determining an appropriate fidelity, a few other factors could govern a designer’s decision in choosing a prototyping tool. What is the starting point? Whether the designer visualizes the concepts on paper, as wireframes or hi-fi visuals. This would decide the ingredients available to kick start the  prototype and thus, govern the choice of the application. Another factor could be the export options available in a particular prototyping tool,  as sometime the created screens could be re-used as final wireframes or mockups.  Then  there are other considerations like does the application let the designer manipulate the underlying  code or not or whether the available libraries  are more suited for web or mobile applications.

In other words, these are some issues that a designer should consider in order to make an educated decision to opt for one tool over the other. We have summed up our evaluation of this tool into a matrix (given below), this should serve as a quick reference to help you choose the right application to suit your needs. 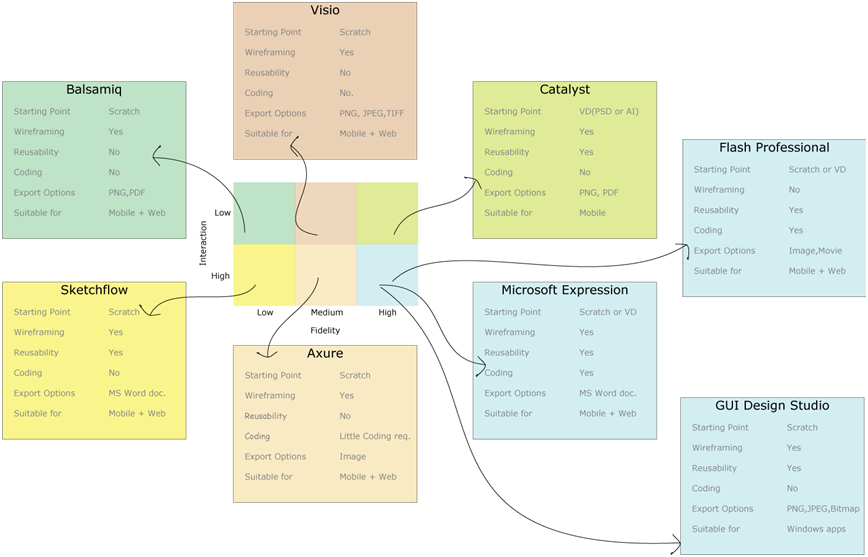